If you look at the right-hand side of the Settle War Memorial, you may notice the names of two American servicemen who are shown as “Killed in this District”.  Their names are inscribed as “H W P Hainey (Oregon)” and “C I Rhodes (Indiana)”.  They also appear on a brass plaque inside Settle Parish church.    As I was preparing a recent talk for the library on researching one’s military ancestors, one of my librarian colleagues suggested that it might be interesting for the audience to learn a little more about these two men.  She said that many Settle people believed that the two Americans were airmen who had been flying over Settle when their aircraft got into difficulty, and that they had bravely steered it away from the town in order to avoid casualties on the ground.  She went on to say that the story had been told again at the commemorative service on Armistice Day last month.

First, here is a picture of the War Memorial, with the servicemen’s names on the bottom two rows: 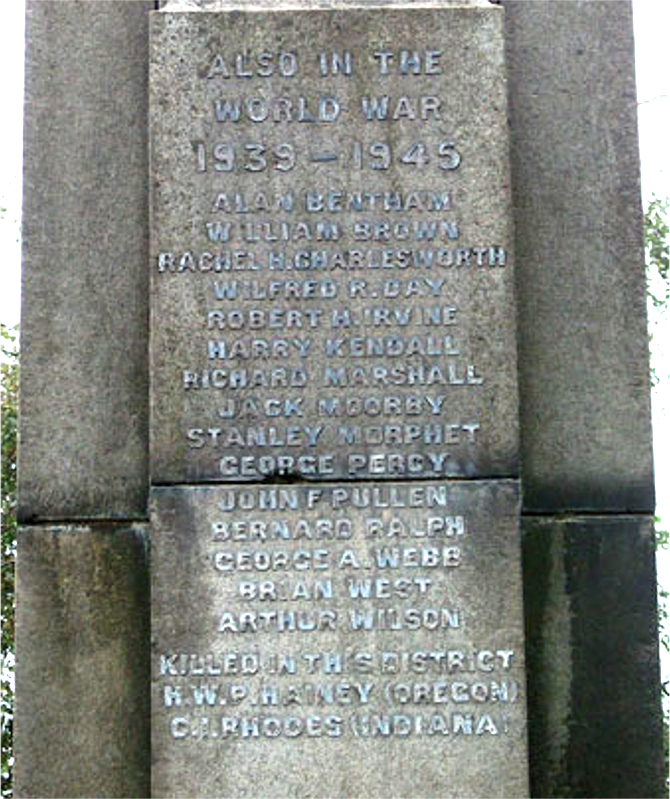 Both men were indeed US airmen.  H W P (Herb) Hainey hailed from Oregon, and was flying with 613 Squadron of the RAF Volunteer Reserve, then based at Ouston, County Durham.  C I (Cecil Iden) Rhodes, from Paoli, Indiana, was a 2nd Lieutenant with the US 93rd Fighter Squadron, based at Goxhill, Lincolnshire.  Both men were aged just 23 when they were killed.

However, it is untrue that Hainey and Rhodes were flying together.  They died on different days in different aircraft, and both aircraft were single-seaters. 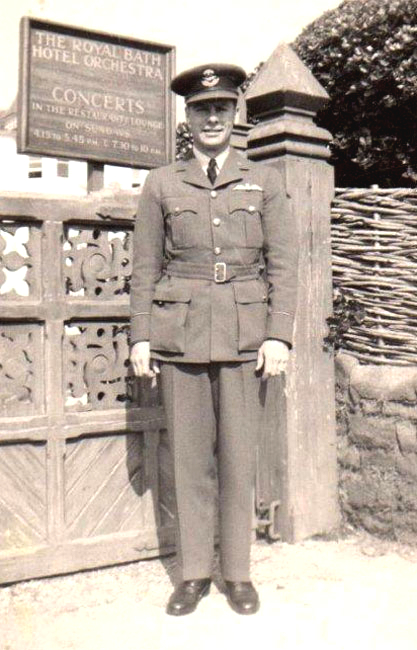 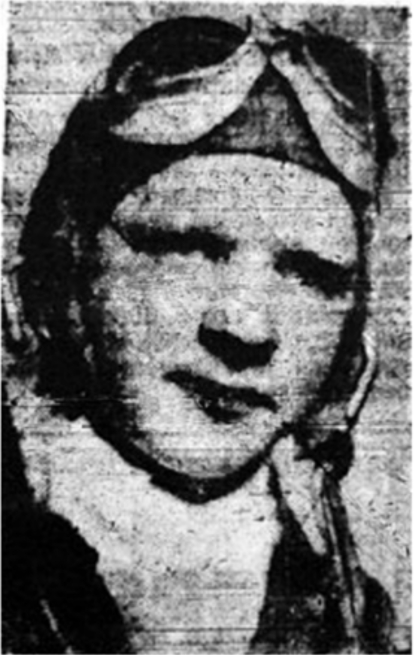 On October 14 1942, Hainey was on a navigational training exercise when he became lost in low cloud somewhere over the Settle area.  His aircraft, a Mustang AG 509, struck the ground near Langcliffe Scar and he was killed. If Hainey did not know, or could not see, where he was, it seems implausible that he was seeking to steer his plane away from Settle.  His body was eventually repatriated to the USA, and he is now buried in Mount Calvary Cemetery, Portland, Oregon.

I have so far found little about Hainey’s background.  His mother and father were mid-Westerners, from Minnesota and Missouri respectively, both born in the 1890s.  Once he had been posted to England, Herb Hainey kept a diary, and he wrote that on October 12 1942, two days before his death, he was suffering flu-like symptoms; on October 13 he says he is feeling better but still weak. The web-page that I consulted (see below) surmises that Hainey’s physical condition could have brought on a sense of disorientation and thus contributed to his crash.

Rhodes was a student at Indiana State University, notably a talented musician and a member of the university’s celebrated marching band (“The Hundred”).  But he also loved flying, and in January 1941 enlisted voluntarily.  He was assigned to the Air Corps, completing his training at the Cal-Aero Flight Academy in California. In June 1942 he was commissioned as a 2nd Lieutenant and assigned to the 93rd Fighter Squadron.  A month later he was posted to England with the 93rd, and only four months later was killed.

On November 2 1942 Rhodes had taken off, also on a navigational exercise, in a P400 AiraCobra.  Somewhere over Settle his engine began to fail.  Observers saw black smoke pouring from the exhaust and felt sure that the pilot was steering away from Settle.  Rhodes bailed out, but too low for his parachute to be effective, and he was killed.  The aircraft struck high ground close to Scaleber Force, just off the Settle to Malham road.  His body was repatriated to his home town of Paoli, and he is buried there in the cemetery of the Independent Order of Odd Fellows.

I have no idea how the local belief arose that Hainey and Rhodes died in the same plane, both gallantly steering away from Settle.  Of course, they were both American, their deaths occurred only three weeks apart, and it does seem that Rhodes was seeking to avoid crash-landing on Settle. So, perhaps over time the two stories became blurred and eventually merged.

Whatever the uncertainties, we should not take anything away from Herb Hainey or Cecil Rhodes.  Both left their native USA to fight on the Allied side; both were volunteers, not conscripted men; and both lost their lives in the process.  We owe them our gratitude.

Sources for this article are:

The first, the Yorkshire Aircraft website, says of itself that it “contains information regarding the many aviation accidents in Yorkshire”, while the second, The Lancashire Aircraft Investigation Team (LAIT), “aims to investigate and record the aviation heritage of our region”.  Both are free to access on-line.

Coincidentally, just after I completed this article, a new book was published which provides a good deal of detail about many more WW2 casualties in this area.  The book is entitled “Wartime Sacrifice in the Yorkshire Dales” by Keith Taylor, and it is obtainable (price £14.99) from the Settle Tourist Information Centre.  I commend it to anybody who is interested and will ask Settle library to obtain a copy.