Anthony Quinn, born 1964, is a British film critic and novelist.  Curtain Call (2015) is his fourth novel and he followed it with Freya in 2016.  These two novels have a number of characters in common but you can read them in either order.

Curtain Call is a murder novel set in London in 1936.  Quinn evokes convincingly the theatrical and artistic underworlds of 1930s London and populates them with beautifully drawn and memorable characters, principally the society portraitist Stephen Wyley and his actress lover Nina Land, and the theatre critic James Erskine and his assistant Tom Tunner.  These four become connected by a fifth character, Madeleine Farewell, who enters their lives by virtue of a lucky escape from the so-called Tie-Pin Murderer.  While the Tie Pin murders underpin the principal plot, an important sub-theme deals with the fears and deceptions that gay men endured in the years before homosexuality was de-criminalised.  By turns, love and human weakness are what drive the actions of the leading characters.  For fear of spilling the beans I will say no more about the way in which Quinn forms the connections between them and concludes the plot, but he does it all very cleverly.

One caution: if you like the forensic detail and police methods that usually characterise crime novels, this book isn’t for you.  The police figure hardly at all; instead, the narrative and its finale are sustained entirely by the leading figures. 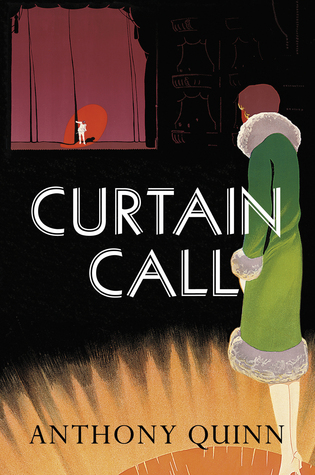 In Freya the leading character is the bolshy 12-year old daughter of Stephen Wyley, who figures briefly in Curtain Call.  This follow-on book tells of Freya’s life, and particularly her relationships, from the immediate post-war years through to the early 1960s.

The main theme is the twists and turns of Freya’s friendship with Nancy Holdaway, whom she meets on VE Day 1945.  They find themselves as students at Oxford in the late 1940s, and each becomes embroiled in turn with untrustworthy Robert Cosway. I will say no more about him for fear of giving away the narrative.  Freya is as assertive and highly-sexed as Nancy is un-self-confident and cautious.  As a mere male I found Anthony Quinn’s treatment of his female characters particularly impressive. Freya is also dotted with other memorable characters who help to shape the plot and give it a certain sexual charge, chief among them Nathaniel Fane, theatre critic, minor playwright and major narcissist. (“They asked me to write a piece on my ten favourite plays, my dear.  Couldn’t do it – I’ve only written five.”)  As in Curtain Call, Quinn’s coverage of social and historical background is utterly convincing, and  this time is sustained over a twenty-year span: to single out just three periods, post-war student Oxford, the Nüremberg trials, and the male-dominated world of the press in the 1950s.

Suffusing both novels is Quinn’s beautiful, elegant prose.  If you want to read 21st century English at its most accomplished, look no further.

I will mention also that Freya was one of our book group’s choices in 2018.  The character of Freya aroused strong dislike in some members and strong admiration in others.  Freya is thus a good choice if you want to provoke discussion!